Navani Kholin's journal is an autobiographical account of history of her life on Roshar, notably including the events surrounding the assassination of Gavilar and the coming of the Everstorm.[1][2]

She keeps a separate notebook related to her scholarly research.

Navani's scholarly background meant that her journals were very thorough; she sometimes wrote down multiple accounts of the same event if she believed that the details were important. She also recorded more trivial information, such as her favorite wine vintages. She had an unknown number of journals, and she kept them all so that she could refer back to them later.[1]

Navani's journals from around the time of her husband Gavilar's death were particularly important, as she had a unique perspective on the king's unusual actions. Gavilar had become increasingly distracted from his royal duties[3] and was clearly hiding something from Navani,[4] causing friction between the couple. Navani's anger and frustration led to an attempt to covertly observe Gavilar; she walked in on him discussing some unusual spheres with Nale and Kalak. He flatly refused to explain himself, instead offering only withering criticism.[4]

After Gavilar's death, Navani recounted the day's events on six different occasions in her journals, noting that her emotional state was different each time she was writing.[1] As the True Desolation began, she referred back to these journals on dozens of occasions, unsuccessfully seeking clues to explain Gavilar's cryptic final words and actions.[5]

—The ketek, written by Navani on Lightday of Jeseses 1174, on the cover of a volume of her journal[2]

On Jeseses 1174, a few days after the Battle of Narak and the rediscovery of Urithiru, Navani began a new volume of her journal; she wrote a ketek on the cover describing the meeting of the Everstorm with a highstorm. It was written as a glyphpair in the shape of two storms crashing into one another. She discussed her grief regarding Jasnah's apparent death and the fact that Sadeas's treachery distracted her from the danger of the singers.[6] Her descriptions of this time period were notable enough that Nazh somehow sought out and read her journal.[2]

During Raboniel's occupation of Urithiru, Navani once again sought clues in her journals as part of her advanced research of Lights. Navani was one of the few people who had seen and described the unusual sphere that Gavilar gave to Szeth. Raboniel allowed her to access the journals, although the Fused also read them herself in order to better understand Navani.[7] When Navani read the journals, she recalled Gavilar insulting her by telling her "You study light, but you are its opposite. A thing that destroys light".[1] This helped lead Navani to an epiphany that Gavilar had somehow procured Anti-Voidlight.[7]

He had spheres on the table. Some twenty or thirty of them. He'd been showing them to his uncommon visitors—most of whom have vanished, never to be seen again.

There was something off about those spheres. My eyes were drawn to several distinctive ones: spheres that glowed with a distinctly alien light, almost negative. Both violet and black, somehow shining, yet feeling like they should extinguish illumination instead of promote it.

You aren’t worthy. That’s why. You claim to be a scholar, but where are your discoveries? You study light, but you are its opposite. A thing that destroys light. You spend your time wallowing in the muck of the kitchens and obsessing about whether or not some lighteyes recognizes the correct lines on a map.[1] 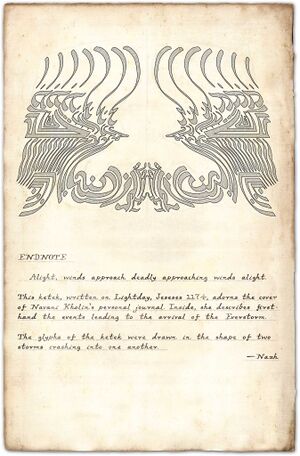 por Isaac Stewart
The ketek that adorns the cover of a volume of Navani's journal from 1174, with a note from Nazh

To be perfectly frank, what has happened these last two months is upon my head. The death, destruction, loss, and pain are my burden. I should have seen it coming. And I should have stopped it.[8] Our first clue was the Parshendi. Even weeks before they abandoned their pursuit of the gemhearts, their pattern of fighting changed. They lingered on the plateaus after battles, as if waiting for something.[9] Soldiers reported being watched from afar by an unnerving number of Parshendi scouts. Then we noticed a new pattern of their penetrating close to the camps in the night and then quickly retreating. I can only surmise that our enemies were even then preparing their stratagem to end this war.[10] The next clue came on the walls. I did not ignore this sign, but neither did I grasp its full implications.[11] The sign on the wall proposed a greater danger, even, than its deadline. To foresee the future is of the Voidbringers.[12]

We had never considered that there might be Parshendi spies hiding among our slaves. This is something else I should have seen.[13]

I was unprepared for the grief my loss brought—like an unexpected rain—breaking from a clear sky and crashing down upon me. Gavilar's death years ago was overwhelming, but this... this nearly crushed me.[14] I seek not to use my grief as an excuse, but it is an explanation. People act strangely soon after encountering an unexpected loss. Though Jasnah had been away for some time, her loss was unexpected. I, like many, assumed her to be immortal.[15] I wish to think that had I not been under sorrow's thumb, I would have seen earlier the approaching dangers. Yet in all honesty, I'm not certain anything could have been done.[16] But, understandably, we were focused on Sadeas. His betrayal was still fresh, and I saw its signs each day as I passed empty barracks and grieving widows. We knew that Sadeas would not simply rest upon his slaughters in pride. More was coming.[17] Unfortunately, we fixated upon Sadeas's plotting so much that we did not take note of the changed pattern of our enemies, the murderers of my husband, the true danger. I would like to know what wind brought about their sudden inexplicable transformation.[6]