“I heard that once an entire bridge crew got eaten by a chasmfiend, one at a time, after it backed them into a dead end. It just sat there, picking them off as they tried to run past. ”

Chasmfiends (Parshendi: Ulo mas vara, lit. Beast of the Chasms)[2] are enormous greatshells native to the chasms of the Shattered Plains on Roshar.[3] 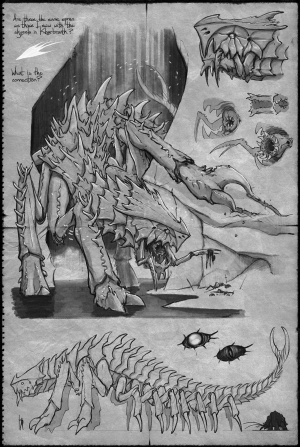 Chasmfiends are the largest known land animals on Roshar: at least twenty feet wide, six times the height of an adult man at their peak, and over twice as long.[4][5] They are long and narrow, with a flattened, split tail reminescent of that of a crayfish.[5] Like most of Rosharan fauna, they're crustaceans, with a carapace exoskeleton covering their entire body. Said carapace is dark violet (though it's possible that other colors can also occur), and extremely durable, being able to withstand even a hail of arrows.[6] It covers the beast's back in a series of interlocking, upside-down-V-shaped plates with horn-like protrusions growing on the edges.[5] Beneath it, the chasmfiend's blood and gore is purple, and smells of mold.[6] The meat is edible for both humans and native fauna.[7]

Below the armor, a chasmfiend has eighteen legs. Four foreclaws are set into broad shoulders, with two clawed toes on each of them. They serve as the primary means of attack, both smashing and slicing the chasmfiend's prey.[6] Behind them, fourteen smaller limbs provide locomotion. A chasmfiend can move extremely fast when it so desires, and has the agility to turn around in the narrow corridors of the chasms.[8]

The chasmfiend's head is triangular, narrowing down to a point like an arrowhead.[9] Inside the long jaw, it has a circular mouth, surrounded by several rings of teeth. There are several types of teeth present, from sharp fangs and flat molars to small mandibles that shove the food further down the throat.[7] Flanking the mouth is a pair of smaller foreclaws, which the chasmfiend can use to manipulate objects and pick up food.[5] Chasmfiend are capable of vocalizing; they make roars that sounds like four bellowing trumpets playing at the same time.

The eyes, set above the jaw, are glassy and green.[9] They also have apparently thick eyelids that close sideways. Possibly a nictitating membrane.[5] The nostrils are located at the very end of the maw, while the ears are bare holes slightly behind the eyes.[5]

“Bavamar did the calculations on Reshi greatshells, and found they should be crushed by their own weight. ”

Like every greatshell, chasmfiends have a gemheart growing inside of them. The chasmfiend gemhearts seem to always be emeralds, and are noted as particularly enormous.[11][12] Those gemhearts are likely what allows chasmfiends to bond with mandras, a type of spren connected to gravity.[10] The bond is a crucial factor in allowing the chasmfiend to grow to its enormous size.[13] It reduces the chasmfiend's weight, keeping it from crushing itself; as such, from a mathematical standpoint, chasmfiends fly, or at least float.[10] Any creature attempting to mimic a chasmfiend, such as a kandra, would require a way to create or substitute that bond to survive.[14]

The mandras leave the chamsfiend's body in the hours immediately after its death. They look somewhat unlike themselves as they return to Shadesmar, being often mistaken for tongues of smoke.[7] 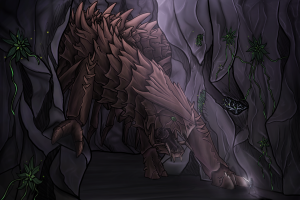 “They must have an interesting life cycle. They haunt these chasms, but I doubt they actually live here. ”

Very little is known about the chasmfiends' youth, and we have not yet seen them, primarily seeing the second and third phases of life[16]. It's highly likely that they don't live on the Shattered Plains for most of their life, but rather migrate there when the time comes for them to breed.[15]

Once there, they set up a nest, and continue hunting and scavenging across the chasms.[3] Eventually, prompted by some unknown instinct, they climb up to one of the plateaus and pupate, forming an immobile, rock-colored chrysalis around themselves. This pupation typically happens during the night, with the chrysalis already formed come daytime. From then, the chrysalis awaits a highstorm; what happens anatomically once that occurs in unclear, as it is at this point that people typically harvest them.[15] They are however known to take in a lot of Investiture when hit by the the Highstorm, this is likely the reason for their location in which they pupate.[17]

The life-cycle of a Chasmfiend is split into at least three stages, including the pupation stage.[16]

They reproduce similarly to Chulls[18], what exactly this means is unknown, but they likely lay eggs.[19] It involves a Spren in some way.[18]

In the natural ecosystem of the Plains, chasmfiends are the apex predators.[15] Their segmented, narrow body makes it easy for them to move through the chasms; still, they fill all available space, and their passing is often marked by long scratches and scraped flora as the carapace drags across the chasm wall.[8] Their massive bulk can also be a form of protection from the highstorm flooding, as it can lock the chasmfiend in place, stopping the flood water from carrying it off.[20]

Chasmfiends are carnivorous; within their original habitat, they likely hunt wild chulls, using their massive foreclaws to crush their prey's shells and feed on the meat within.[9][6] As they travel to the Shattered Plains, however, they turn to carrion-eating, devouring corpses of creatures that fall or are washed down into the chasms from the pleateaus above.[21] 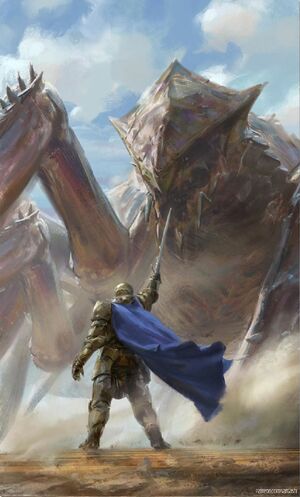 Both listeners and humans hunt chasmfiends down for their gemhearts, although meat and carapace are also harvested.[6] Most of the time, only the chrysalis is "hunted", as it is then that the chasmfiend is at both its most vulnerable and least aggressive.[3] Once the chrysalis is located, the hunters break it open with mallets and Shardblades and extract the gemheart within, killing the chasmfiend in the process. On such "hunts", the biggest danger are the other armies after the same chrysalis.[7]

Though rarely, adult chasmfiends are also hunted, mostly when one wanders into a territory claimed by one of the highprinces. First, the chasmfiend is lured to climb up onto the plateau by stringing out hog carcasses and pouring hog blood into the chasms, to let the beast smell it. Once the chasmfiend emerges, which can take up to several hours, a flock of wild hogs is let loose for it to pursue. Archers equipped with grandbows -- the only bow type capable of harming the chasmfiend -- then pepper the creature with arrows to weaken it. Eventually, Shardbearers approach the beast and cut off its legs with their Blades.[3] Once toppled, the chasmfiend is set up for a killing stroke, delivered with a Blade thorugh the spine. The gemheart can then be harvested from the downed beast.[6]

“Animals like the chasmfiends don't normally have predators. Suddenly losing a hundred and fifty or more of their numbers a year could be catastrophic to their population. ”

During the War of Reckoning, the number of chasmfiends that died before they could produce offspring soared, with over fifteen being hunted down every month for their gemhearts, and the wealth and Soulcasting ability they provided. As a result, in the waning years of the war, their numbers began to dwindle, with fewer chrysalises appearing. Shallan Davar theorized that as the species previously lacked any predators, it simply couldn't cope with this new influx of losses, and was thus headed towards extinction.[15]

Some solutions have been proposed to mitigate this; primarily, reducing the number of hunts and even breeding chasmfiends in captivity for their gemhearts.[15] However, with the arrival of the Everstorm, those plans, as well as the hunts themselves, have been put on hold as a bigger threat in form of the Voidbringers occupied the attention of the armies that would normally hunt chasmfiends.[22] 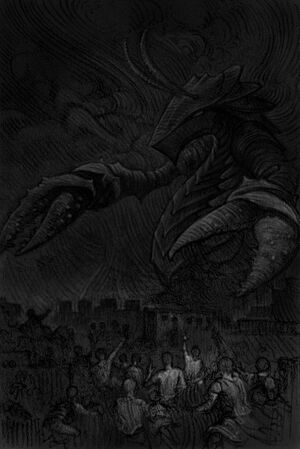 por Greg Call
An ancient depiction of a Voidbringer, based on a chasmfiend

Chasmfiends are deservedly said to be the deadliest predators on Roshar by the Alethi. Prior to the War of Reckoning, they were considered legendary, with people rarely venturing out into the Plains to hunt them.[23] Back then, to kill a chasmfiend was extremely rare; king Gavilar had never slain one, and not for lack of trying. As the war progressed, however, much of the mystique surrounding them has been stripped away, though they are still understood to be extremely dangerous.[3]

There are numerous saying involving chasmfiends; likely, those developed during the War. They include:

Prior to and during the War of Reckoning, it was a common belief among the Alethi that the listeners considered the chasmfiends their gods.[6] This was a misinterpretation made by early explorers based on linguistic barriers, and one that was never thoroughly investigated; as such, near the end of the war, people like Shallan came to doubt it.[31] In fact, even prior to his death, Gavilar Kholin was aware that the listeners did not, in fact, worship the chasmfiends; however, with the assassination and the subsequent conflict, there was never the time for that to become common knowledge, and so the misconception persisted.[32]

Chasmfiends have also had their place in the Vorin religion. Ancient depictions of Voidbringers were often based on chasmfiends, leading some to believe that chasmfiends were either Voidbringers or part of Voidbringer forces. However, Jasnah Kholin's research suggested that it was far more likely that the artists who originally depicted Voidbringers, who lived generations after the last Desolation, did not know what said Voidbringers looked like, and so used the most terrifying creature they knew of -- the chasmfiend -- to approximate.[23]

With the arrival of the True Desolation, it became apparent that chasmfiends being depicted as Voidbringers came from historians conflating them with thunderclasts -- another type of massive creatures, which actually serve Odium. Thunderclasts and chasmfiends share very few physical characteristics; most notably, their enormous size and the shape of the head. However, they are killed in very similar way, by slicing at their legs with Shardblades.[33]

In the night the Everstorm is summoned, at least one chasmfiend helped the listeners who refused to take stormform escape the chasms. The chasmfiend continues to work with the listener dissidents afterwards.[34]