Ishnah is a Lightweaver and a member of the Unseen Court on Roshar.[2] She is bonded to the Cryptic Motif.[1]

Ishnah is a short woman[4] with straight, black hair and dark brown eyes. She usually wears makeup, including red lipstick and penciled eyebrows,[3] and an Alethi havah with a gloved hand instead of a sleeve typical of a high ranking darkeyed woman.[5] Her cryptic, Motif, rides on the ornament at the end of the central hair spike used to keep her braids in place.[2] She is slightly older than Shallan.[1]

Her tenacity and determination are shown in the persistence she uses to earn Shallan's consideration.[6][7] She exudes a great deal of self-assurance, between her comfort in Urithiru's underground and her willingness to take on the difficult task of training Shallan's men in espionage, and she portrays that confidence while keeping calm during high-pressure operations while in Shallan's employ.[8] She suffers little nonsense and is usually fixated on her work.[5]

She is pragmatic but ambitious. She is always finding opportunities.[2] Because of her past, she is unsure if she "belongs in the light".[1]

“Espionage is about the careful gathering of information. Your task is to observe, but to not be observed. You must be likable enough that people talk to you, but not so interesting that they remember you. ” 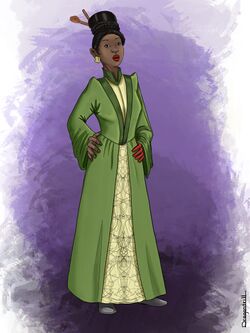 Ishnah became somewhat skilled in the art of espionage while in the employ of Brightlady Hamaradin. She asserts that she is an excellent writer, able to take dictations, and has experience with message coding.[3][7] While Mraize claims that her position was only that of an assistant, Ishnah proves to know many practical field techniques. Most notably is her experience with observation and information gathering. Ishnah has a very good memory (using a "mind museum") and the ability to notice and track details on par with Shallan.[5] She also knows how to search rooms and manage infiltration operations.[7][9][10] Ishnah is comfortable in Urithiru's underground networks and claims to know contacts who are "expert" spies.[7]

As a Lightweaver, Ishnah can use the Surges of Illumination and Transformation. She has progressed in her oaths far enough to have earned a Shardblade.[2] She could gather her own squires, but chooses to remain with the Unseen Court.[2]

The Soulcaster enters (or partially enters) the Cognitive Realm to convince the sentience of an object to change materials, transforming it into something else if successful. Some transformations are more basic than others, with more complicated transformations requiring a more skilled Surgebinder and more Stormlight.

Lightweaving deals in illusions. It involves the manipulation of waves of sound or light and has a strong Spiritual component requiring a certain measure of Connection and a full mental picture of the desired illusion.

Ishnah worked as an assistant[11] in House Hamaradin's spy network, where she was trained in several useful espionage techniques. Brightlady Hamaradin was eventually assassinated after vexing the Ghostbloods, and when her spies were named suspects Ishnah fled. She eventually came to work for a gang of petty thieves in Urithiru's underground.[7] Her gang used Blackbane.[12] She crossed paths with Veil, in a tavern in All's Alley, where Shallan revealed herself to be a member of the Ghostbloods.[4] With a desire to use her training for something greater, Ishnah sought out Veil in hopes of joining the secret society herself.[3] After being initially turned her away, Ishnah began spying on Veil, hoping to impress the woman with her skills. Shallan eventually caught her spying and the two spoke at greater length of Ishnah's past experience and motivations. Seeing the several uses for the woman, Shallan offered her the opportunity to train her men, and Ishnah accepted.[7]

“All right. We'll see. Just don't blame me if the pigs don't end up talking.”

Ishnah began her instruction by taking Veil, Vathah, Gaz, and Red to a tavern where she explained the importance of learning to make observations without being noticed, pointing out an informant actively doing this, whom even Shallan had failed to notice. After the initial lesson she explained some practical observation and memorization techniques and insisted that they should learn glyphs for note taking purposes.[5]

A few weeks later, Shallan selected Ishnah, along with Vathah and Red, to travel with her on Elhokar's mission to retake Kholinar, under the pretense that she was Shallan's maidservant.[13] Upon the groups arrival in the city, Shallan confirmed Ishnah's growing suspicions that she and Veil were the same person.[9] In Kholinar, Ishnah supported Shallan's efforts to earn the notice of the Cult of Moments by helping her steal and redistribute food. Their first job occurred at Rockfall, where Ishnah, disguised as a rug merchant, distracted the Brightlady Nananav while Shallan and her men committed the burglary.[8] Ishnah often looked for opportunities to continue Vathah and Red's education during their time in Kholinar, going so far as to train Vathah to plan their operations.[10] She also acted as Shallan's assistant, taking care of minor tasks such as cleaning blood out of Veil's clothing[14] and tracking down a copy of Mythica.[8][10] Shallan later attached illusions of Veil to Ishnah and Vathah in order to increase her visibility. On one such outing, someone finally made contact with Ishnah, giving Veil instructions to join the revel.[15]

After Shallan's abrupt departure from Kholinar via the corrupted Oathgate, Ishnah, Vathah, and Red worked together with Skar and Drehy to rescue Gavinor Kholin and escape the city unharmed. They traveled south, where they were able to make contact with Dalinar Kholin, who sent Kaladin to extract the group.[16][17]

Ishnah was amongst the first members of the Unseen Court. She was part of the group that captured Ialai and the Sons of Honor in the warcamps. [12]

Ishnah was selected by Shallan for the mission to Lasting Integrity.[2] She suspected her as a spy for the Ghostbloods, given her interest in the group.[2] Shallan dug for information and uncovered that Ishnah had been funneling her stipend to her previous gangs. She'd hoped they'd use the money to pull themselves up, but ultimately, they used them to start a new racket.[1] This group sailed from Nohadon's Stairway to Nameless, then caravanned to Lasting Integrity.

Ishnah respects Shallan's position among the Ghostbloods, and though she risks much to join Shallan, the extent of her loyalties are unknown. She is somewhat of a mentor figure for Vathah, having taken him under her wing more so than any of Shallan's other guards.

Shallan considers her to be one of the most trustworthy members of the Unseen Court and considers Ishnah her right hand woman.[12][1]