The Emperor's Soul is a stand-alone novella by Brandon Sanderson, published in November 2012 by Tachyon Publications. It won the 2013 Hugo award for best novella.[1]

“When Shai is caught replacing the Moon Scepter with her nearly flawless forgery, she must bargain for her life. An assassin has left the Emperor Ashravan without consciousness, a circumstance concealed only by the death of his wife. If the emperor does not emerge after his 100-day mourning period, the rule of the Heritage Faction will be forfeit and the empire will fall into chaos.
Shai is given an impossible task: to create - to Forge - a new soul for the emperor in less than 100 days. But her soul-Forgery is considered an abomination by her captors. She is confined to a tiny, dirty chamber, guarded by a man who hates her, spied upon by politicians, and trapped behind a door sealed in her own blood. Shai's only possible ally is the emperor's most loyal councillor, Gaotona, who struggles to understand her true talent.
Time is running out for Shai. Forging, while deducing the motivations of her captors, she needs a perfect plan to escape...”

“Shai is a Forger, a foreigner who can flawlessly copy and re-create any item by rewriting its history with skillful magic. Though condemned to death after trying to steal the emperor's scepter, she is given one opportunity to save herself. Despite the fact that her skill as a Forger is considered an abomination by her captors, Shai will attempt to create a new soul for the emperor, who is almost dead from the attack of assassins.
Delving deeply into his life, she discovers Emperor Ashravan's truest nature—and the opportunity to exploit it. Her only possible ally is one who is truly loyal to the emperor, but councillor Gaotona must overcome his prejudices to understand that her forgery is as much artistry as it is deception.
Skillfully deducing the machinations of her captors, Shai needs a perfect plan to escape.

The fate of the kingdom lies in one impossible task.

Is it possible to create a forgery of a soul so convincing that it is better than the soul itself?”

The story follows Shai, an imprisoned Forger. She attempts to recreate the soul of Emperor Ashravan with the help of his councillor Gaotona.

“It tells the story of a woman named Shai, a thief and a Forger - a person capable of rewriting the pasts of objects in order to change their present.
She starts off in prison, but instead of being executed, she is offered an opportunity. The emperor has been wounded in the head by assassins, and has become a vegetable. His attendants have hidden this from the empire and will trade Shai her life in exchange for creating a Forgery of the emperor's soul, hopefully making it seem like the attack on his life never happened. ” 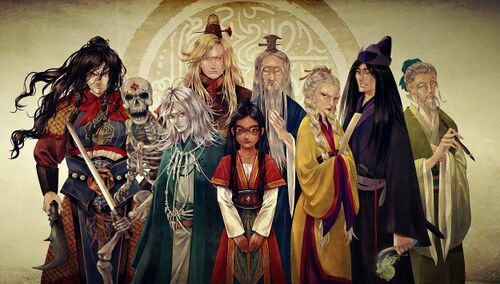 The book is set in the cosmere, taking place in the same world as Elantris, though in a very different region and without any of the characters from Elantris, apart from Hoid, who is the Imperial Fool and mentioned several times, though he never appears in-person.[5] It tells the story of a woman named Shai, a thief and a Forger; or person capable of rewriting the pasts of objects in order to change their present.

Hoid was written into the original prologue, as the Imperial Fool who set up Shai to be caught stealing the Sceptre. The scene was removed due to Brandon's alpha readers not liking it.[6]

The god which Shai worships has some relevance to the whole cosmere.

Note: the Postscript is found in Arcanum Unbounded, a collection of Cosmere stories.

Brandon began forming ideas for "The Emperor's Soul" during a trip to the National Palace Museum in Taiwan. The tojang, or red stamps that adorned much of the artwork, stood out to him. In addition to the stamps of the artists who created the work, scholars and nobility who particularly liked the work would add their stamp to it, as well. From these stamps came the idea of Soulstamps, capable of rewriting the nature of an object's existence.

A con-exclusive version of this and Legion was printed at some point, and a similar version was published in the UK by Gollancz

Para a cover gallery of The Emperor's Soul, ver /Covers.

The Emperor's Soul consists of one prologue, fourteen chapters, and one epilogue, reaching a total 31,925 word count. There are three different unique point-of-view characters in a total of 21 POVs.