When Alcatraz and Grandpa Smedry make a pilgrimage to the Free Kingdom city of Nalhalla, the Smedry home base, Alcatraz is shocked to see that he is, in fact, a legend. When he was a baby he was stolen by the Evil Librarians, and his mother, a Librarian herself, was behind the whole scheme. Now, with his estranged father, who is acting indeed strange; Bastille, who has been stripped of her armor; and Grandpa Smedry, who is, as always, late to everything (that’s his Talent), Alcatraz tries to save a city under siege. From who? Why, the Librarians of course!

Para a chapter by chapter summary, ver The Knights of Crystallia/Summary.

Alcatraz and company are finally headed to Nalhalla, flying this time in a giant glass bird. A bomb explodes in Draulin’s chambers, but Alcatraz survives with the help of Grandpa’s Talent. They arrive at Keep Smedry. Sing Sing Smedry greets them with the news that Librarians are in the city negotiating a treaty to end the war if the Free Kingdoms give up his homeland of Mokia. Grandpa and Alcatraz pledge to help.

Their arrival at the council chamber interrupts the proceedings, and Alcatraz meets Bastille’s father, none other than the High King himself, Brig Dartmoor. While Bastille heads off to her trial, Alcatraz goes to meet another cousin, Folsom, and his love interest, the defector Librarian Himalaya Rockies, to try to figure out what the Librarians are scheming. He sees his mother at a party and follows her to the Royal Archives (Not a Library!), but she somehow loses them.

In his travels about the city, Alcatraz realizes that he is a huge celebrity and for a while gets caught up in the adulation. He snaps out of it when grandpa gives him a smack and points out that he’s becoming like his father, who remains aloof and dismissive of his son. Alcatraz has gotten so caught up in his fame that he’s forgotten that he can testify at Bastille’s trial. They rush off to Crystallia.

As usual, Grandpa and Alcatraz arrive late, but they insist on testifying anyway. Their pleas do seem to reduce the sentence of Bastille, who is cut off from the Mindstone for a couple of days. When they arrive back at Keep Smedry, She Who Cannot Be Named is waiting there for them. She appears to be a nice old lady, but she is, in fact, one of the most vicious Librarians of them all. Her presence at the treaty negotiations is not a good sign (except for the yummy cookies she brings).

Alcatraz rushes back to the Royal Archives to beat Shasta to whatever she is looking for while Grandpa goes to the treaty vote to try to dissuade the council from signing. Alcatraz finds a large room with books heaped everywhere and decides that he needs a Librarian to organize it all. With the help of Prince Rikers, Bastille’s brother, they go fetch Himalaya and she begins to sort the books with supernatural speed.

Just as Alcatraz finds a book in the Forgotten Language containing information about the Smedry Talents, Shasta enters the room with a group of Librarian thugs and a Dark Oculator. He disguises himself as a Librarian using Disguiser’s Lenses and hands the book over to Shasta. Fitzroy reads the cover and confirms it’s the one they’re looking for. Alcatraz breaks the lights in the room and they all escape; however, they have only escaped into a Librarian stronghold – the entire room has been switched out using Transporter’s Glass! The whole crew is captured. 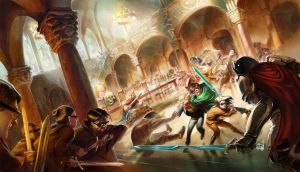 After some time, Fitzroy prepares to cut Himalaya’s throat (on Swcbn’s orders). Alcatraz has Folsom and Himalaya declare their love for each other, then he marries them. She now has Folsom’s Talent of dancing really badly (i.e. fighting like a ninja), and they all manage to escape again. Alcatraz powers the Transporter’s Glass himself and they escape back to Nalhalla.

They rush to the council room and interrupt the proceedings again, this time just as the High King is about to sign the treaty. Swcbn is there, smiling and knitting. They reveal to the king the day’s events, and he tears up the treaty. Suddenly, all the Knights of Crystallia collapse, and a battle ensues between the Smedrys and the Librarians. The only knight to not be incapacitated is Archedis, who is actually a Librarian spy. Bastille, already cut off from the Mindstone and therefore not affected by the attack, fights and defeats him. Swcbn disappears in a huff.

Epilogue – Attica makes a grand announcement to the council that he has discovered how the Smedrys gained their Talents and that with some more research, he can give them to everyone. He’s disappointed to learn from Alcatraz that Shasta has stolen the book he needs. Alcatraz is worried about his father’s discovery and plans to watch him and stop him if necessary.

Para a cover gallery of The Knights of Crystallia, ver /Covers.

Alcatraz Versus the Knights of Crystallia consists of one foreword, twenty-one chapters, one epilogue and one afterword, reaching a total 57,955 word count.