“Is that not how you’ve made your entire career? Speaking honestly, teaching people what to expect of you, then expecting them to be honest to you in return? ”

Gaotona is an arbiter of the Heritage Faction of the Rose Empire on Sel.[2] He is noted as being the most influential of the arbiters, due to favor of the emperor [3].

Gaotona is elderly, and the oldest of the arbiters. He stands in a straight, thoughtful pose, with his hands clasped behind his back.[3] He is a clever man,[5] quickly picking up on exaggerations of Shai's abilities.[4] Gaotona has a strong conscience, unwilling to force others to endure what he himself will not submit to.[5] He is noted for being a very genuine person.[6] He values truth in both himself and others, expecting them to treat him with the same honesty he treats them.[4][1] Gaotona also has an extreme appreciation of art and beauty. He believes that art is for the people who view it and not the person who created it.[7] Masterful art can bring him to tears.[8] Gaotona expects the best in other people. This combined with his sincere, honest nature leads many people around him to feel perpetual disappointment from him. He encourages others to be what he feels is their best and gives disappointed looks when they fail to meet his hopes.[5]

Gaotona has extensively studied art, to the point that he can recognize the styles of the Vivare dynasty or Chamrav at a glance.[9] While he is not an expert on technique, he has enough knowledge of painting to examine how a painting was done.[2] During Shai's captivity, Gaotona studies how soulstamps are made. He can understand and read specific symbols that go into the soulstamps, including a symbol denoting time.[6] Gaotona considers himself to have only faint knowledge in the area,[8] but he is able to decipher the purposes of Shai's five Essence Marks himself.[7] Politically, Gaotona holds power as one of the five arbiters of the Heritage Faction appointed by Emperor Ashravan. Despite being less influential due to falling out of favor with the emperor, Gaotona is still one of the next five most powerful people in the Rose Empire.[3] Particularly when Ashravan is injured, Gaotona is in charge of the emperor's security.[9]

Gaotona was born in the same area as Ashravan.[5] He extensively studied art of historical cultures.[9] He became Ashravan's mentor, constantly encouraging him to become emperor. He is known to have been incredibly close with Ashravan, which has given him influence among the other arbiters. Gaotona, along with Frava and three others, were appointed as the five main arbiters of the Rose Empire.[3] The resentment Ashravan felt for Gaotona slowly pushed Gaotona out of favor with the emperor. Gaotona disagreed with Frava on almost every topic discussed.[2] When the Glory Faction sent assassins after the emperor, Gaotona and the other arbiters took over with damage control. They first brought in resealers to heal the wound. The physical wound was healed, but Ashravan's mind was gone. To keep their positions, Gaotona and the other arbiters considered secretly hiring Shai, currently a prisoner, to reForge Ashravan's soul.[3] Gaotona, observing Shai's artwork, voted yes on using her out of a desire to understand her. This was the first time in years he and Frava had agreed on a vote.[2]

“Why? Why would someone capable of this artistry, this majesty, turn to forgery? Why not create original paintings? Why not be a true artist?
I must understand.”

Gaotona volunteers to personally oversee Shai's work to reForge Ashravan's soul. He is extremely cautious in guarding Shai. He forbids her from telling her guards about her work. He also employs Weedfingers to use Bloodsealing to prevent Shai from escaping. Gaotona's previous interaction with Weedfingers led him to believe the man is trustworthy in imprisoning her.[4] Gaotona continued to watch and visit Shai each day as she worked.[4] While Shai was doing her initial research into Ashravan's life, Gaotona brought a book to her room to read. Gaotona asks Shai to tell him about how Forgery works after he watches her Forge the desk in her room. He finds the bits of Realmatic Theory that she tells him to be superstitious nonsense, but his mind is open to learning. At Shai's advice, Gaotona increases the security around the emperor. He appoints someone to change a fake chamber pot and forbids anyone without a card showing his personal signature to enter the room.[9] The seventeenth day after the assassination attempt, Gaotona took a break from watching Shai and went to the Delbahad festivities.[10] 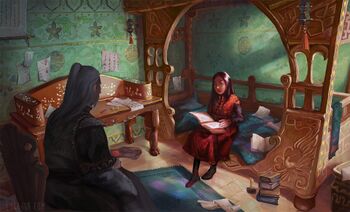 Gaotona offered himself up as the test subject for Shai's Essence Marks, as he fit the qualifications and did not want to subject any of his people to the abomination of Soul Forgery. The first one he tried took, but the second did not. Talking to Shai about art, Gaotona realized there was something the arbiters missed about ShuXen's painting. Shai admitted to him that the version hanging in Frava's office was a fake and that she'd burned the original. Angry at the destruction, Gaotona left for the day.[5] Gaotona remained angry at Shai for burning the painting for some time, though he was able to return to a professional relationship and continue testing the Essence Marks.[6] By day fifty-eight, he had tested over a hundred stamps for Shai.[11] In order to better understand what Shai is doing to him, Gaotona studies Forgery and soulstamps. His understanding grows quickly, and he soon can recognize what specific symbols in the stamps represent. Shai finally uses the soulstamp showing Ashravan's shame felt from Gaotona. The realization shocks Gaotona. Shai comments that, unlike the other arbiters, Gaotona is willing to use Forgery because he wants the man he loved as a son back. Gaotona realizes that, despite their best efforts, they've all underestimated Shai and her ability with people.[6]

On day seventy-six, Gaotona decides to bring Shai's Essence Marks to her room to talk to her about them. When he arrives, Gaotona finds Shai stamping the wall to paint it with intricate patterns and designs. Gaotona observes that Shai had the skills to paint the walls herself and wonders again why Shai would choose to Forge it instead. Gaotona asks about the five Essence Marks, and Shai tells him the truth about her escape plan if she ever wanted to leave the life of a Forger. Shai also tells him the truth about ShuXen hiring her to destroy his own painting. While Gaotona does not agree with Shai, he understands her perspective. He also sees the potential in soulstamps to bring awareness of other people's perspectives to people.[7]

When Gaotona learned that Shai had broken out of her room, he immediately went for Ashravan's rooms, bringing Shai's Essence Marks with him. Gaotona returns them to her, keeping up the arbiters' end of the deal. Gaotona realizes that Shai manipulated him, but is unsure how. Shai tells him it was the hardest way possible, by being genuine. Shai gives him a book containing the truth and he tells her to leave, before Weedfingers catches her. Fearful of what he'll find, Gaotona enters Ashravan's room. Gaotona is amazed at the similarity between what Shai created and the original Ashravan.[1] When Gaotona read the copy of the book Shai had left him, he discovered it was a copy of Ashravan's soulstamp. Shai had written an explanation of the modifications she'd made that would, slowly, lead to Ashravan becoming a better man. Overcome by the beauty of the art Shai had created in her work, Gaotona realized the only way the modifications would work is if no one knows about them. He burns the book.[8]

“You loved him as a son—the youth that you mentored, the emperor you always believed in, even when he didn’t believe in himself. ”

Gaotona loves Ashravan and views him as a son. He was Ashravan's mentor and always believed in and viewed the best in him, such as encouraging Ashravan to become emperor. Ashravan felt shame and disappointment for not living up to what Gaotona believed of him.[6] Because of this, Ashravan began to resent Gaotona and slowly pushed him further away, until he was almost willing to have Gaotona replaced as arbiter.[8] When Ashravan was braindead, Gaotona was the one who missed him as a person, rather than as emperor. Gaotona was unaware of Ashravan's resentment towards him until Shai showed him with a soulstamp.[6] 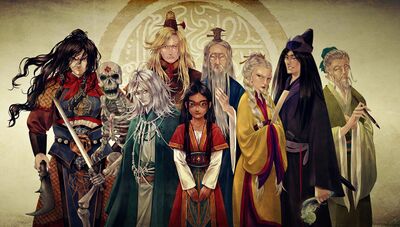 Initially, Gaotona has a strong dislike towards Shai because of her status as a thief and a Forger. Seeing her artistic talents, he believes that she has wasted her life and feels disappointment that she is not creating her own art. The two have disagreements over Shai's actions, particularly Shai's burning of ShuXen's painting.[5] By being genuine, Shai allows Gaotona to understand her perspective on art and her actions. While Gaotona claims to not be on her side, he does not want her dead and aids in her escape. Gaotona left enough of an impact on Shai for her to write him into her final Essence Mark as a kindly grandfather.[1] She comes to trust him enough to leave her book about Ashravan's soul with him. Similarly, Shai managed to change Gaotona's view on art enough that he was willing to burn her book, which he viewed as a masterpiece.[8]

Frava and Gaotona have an extremely antagonistic relationship. While they work together as arbiters of the Heritage Faction, they almost never agree on any course of action to take.[2] Frava views him as an obstacle because he is the only arbiter willing to go against her, and she wants to remove him from his station for it. Frava misunderstands Gaotona's sincerity, instead believing it to be naiveté. She tries to use his perceived foolishness to her political advantage whenever possible.[8]