Vathi is a woman from the Eelakin Islands on First of the Sun.[1]

“This woman spoke. A lot. People did that back on the Eelakin Islands. Her skin was dark, like his, and she had the sound of his people. ”

She has dark skin and dark, curly hair, and is seen wearing a tight vest and green linen skirts. In the jungle, she carries a pack and her white and green Aviar, Mirris. After her journey back to her camp, Dusk notes that she wears a new dress and "smells of flowers", although her hair still has snarls.[1]

She is born in the homeisles but her name does not follow the Eelakin tradition, an example of the growing influence of the mainland. Growing up, she was often told the story of Yaalani the Brave, supposedly the only female trapper ever to have lived. As an adult, she questions the authenticity of this story, noting that most cultures have similar myths of female role reversal that are actually used to reinforce gender stereotypes.[1]

She has an Eelakin accent, but with a polish that indicates that she is educated, and she mentions having read books about trappers and the Pantheon. She is intellectually curious, and she irritates Sixth of the Dusk with her many questions about his life and the flora and fauna found on Patji. She is courageous and unflappable, and is able to react quickly in dangerous situations.[1]

“She was not a trapper. A scholar should not have been able to do what she did. ”

Vathi is knowledgeable, confident, and resourceful. With the help of her cognitive shroud Aviar, she is able to move through the jungle on Patji without being killed. Sixth notes that she is fast and agile, and even believes that he is tracking a young trapper when he first comes across her path. She appears to a very high level of academic knowledge about the Pantheon, and is limited only by her lack of real-life experience on the islands. She is able to figure out several key pieces of information even when she only has a few clues to work with.[1]

There are some indications that Eelakin society is patriarchal, and Vathi seems to defy convention. Sixth assumes she is a scribe when he first meets her, and she surprises him with her fortitude and skill on multiple occasions. Even after their trip through the jungle, Sixth is still perplexed to see that Vathi holds a position of some authority in the Company and is addressed as "Lady Vathi". Vathi makes note of her disdain for the tale of Yaalani the Brave and also mentions that Captain Eusto sees her as a threat to his authority.[1]

Vathi was employed by the Northern Interests Trading Company on the mainland. It is not clear how long she worked there, but she referred to a number of past meetings with the Ones Above. She had also previously met Sixth on one of his rare visits to the company to acquire technology.[1]

She joined the Patji expedition captained by Eusto, although her interests were more scientific than financial. After the Company established a small fortress on the island, Vathi joined a scout team seeking a site for a second fortress. The scout team stayed too close to the beach and was attacked and annihilated by a deepwalker. Vathi managed to fire a spear cannon at the beast; it had little effect, but she escaped into the jungle. Mirris was injured in the process.[1]

Sixth came across the remains of the scout team and tracked the survivors into the jungle, eventually following Vathi's path which led towards one of his safecamps; unbeknownst to Sixth, Vathi had used a handheld Aviar locator to detect the location of the safecamp, as she hoped to find a trapper and request assistance. She was able to successfully navigate the extreme dangers of the jungle, but she was not skilled enough to avoid being tracked by Sixth and eventually got caught in one of his traps.[1]

Meeting Sixth of the Dusk 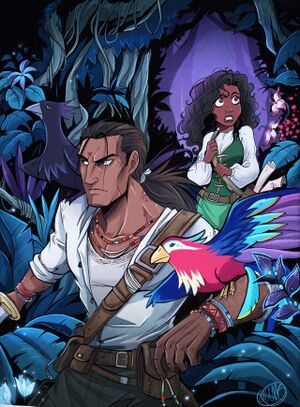 por Shuravf
Sixth and Vathi travelling through the jungle

Sixth was not pleased to find Vathi, but he was impressed by her skill and her treatment of her injured Aviar. Vathi believed that the Pantheon would eventually be tamed and revealed the true scope of the Company's expedition to Sixth, which angered him. Something suddenly agitated all of the Aviar on the island, and Sak gave Sixth visions of imminent death. Sixth grabbed Vathi and demanded that she tell him more about what her colleagues were doing. Although Sixth's actions disturbed her, Vathi discussed her interactions with the spacefaring Ones Above, including the fact that they were very interested in Aviar but seemed to have rules about trading with less advanced civilizations. She informed him of the large Aviar tracking device held on one of the Company's ships and she assumed that it was the source of the disturbance.[1]

Although traveling in the jungle at night usually led to certain death, Sixth demanded that Vathi immediately leave with him to stop the Company from activating the device again. She declined, and Sixth allowed Sak to show Vathi visions of her death, revealing that Sak granted a talent even though she was not a known species of Aviar. Vathi quickly realized that Sak was a bird from the mainland and had somehow gained a talent on Patji. She also learned that Patji's Finger was a type of tree that had blossoms with a mental signature. She was shocked by these revelations and wanted to learn more. Leaving Mirris behind to heal, she agreed to travel to the Company fortress.[1]

At one point Vathi saw a mating plume from an Aviar and grabbed it, setting off a trap, but she and Sixth avoided serious injury. After he admonished her, he realized that he was treating her like an apprentice and opened up to her a bit more, even telling her the true meaning of his name. A nightmaw attacked, and Sixth was dumbfounded when Vathi was able to kill it with her spear cannon. However, the noise attracted other nightmaws, and the pair recklessly fled through the jungle, ending up at Patji's Eye. Vathi was incredulous when she saw hundreds of Aviar around the lake, and she deduced that the birds gained their talents from eating the fruit of the Patji's Finger trees that grew nearby; Sixth clarified that the key was parasitic worms that lived in the fruit. Sixth nearly sacrificed himself to try and allow Vathi to escape, but they realized at the last moment that they could use one of the blossoms and the spear cannon to lead the nightmaws away from the area.[1]

Return to the Company

“We'll lose it all. We can’t fight them. They’ll find an excuse, they’ll seize the Aviar. It makes perfect sense. The Aviar use the worms. We use the Aviar. The Ones Above use us. It’s inevitable, isn’t it? ”

Vathi and Sixth made it back to the fortress, and she quickly told Winds not to activate the machine again, only to learn that it was never turned on - only opened. After considering some suspicious actions by the Ones Above, Dusk and Vathi realized that the technology was essentially a trap. The Ones Above wanted to rapidly advance society on First of the Sun to the point that they would not violate their "rules" by taking the Aviar. Dusk agreed to help Vathi foil this plan.[1]