“My name is Stephen Leeds, and I am perfectly sane. My hallucinations, however, are all quite mad. ”

Stephen Rhone Leeds is a private investigator living in America. 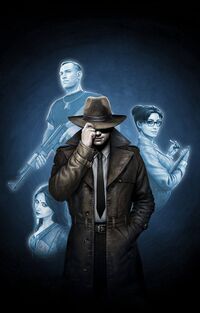 por Dominik Broniek
With some of his aspects

Stephen is a rather bland man in his thirties with a mundane face.[2]

Stephen does not like being studied by psychologists, something they attempt quite often. He is often quite snappish and rude towards them, and sometimes this spills out into his relationship with his butler, Wilson, and his aspects.[1] He has a reputation as a reclusive and amoral jerk. He himself concurs on reclusive and jerk.[3] He also repeatedly denies the characterization of him as a genius, insisting that it is his aspects who are smart.[4] When confronted about Sandra, he grows angry and impulsive.[4]

Stephen has the capability to process large amounts of information subconsciously. This, combined with his mental strangeness, led to the creation of aspects, compartments of his brain that manifest as hallucinations. Each aspect specializes in manifesting one (or sometimes more) areas of his subconscious knowledge. Stephen must have the aspects re-tell him the information he already knows in order to process it directly.

Stephen is able to skim a book or listen to a tape and create an aspect with the knowledge from that book or tape, even though he doesn't process the information directly.[5] In a similar vein, he is able to skim a sheet of facts and have an aspect "read" it to him later.[6]

Stephen regularly binges on all kinds of information so that his aspects can tell it to him later.[7]

Typically, Stephen's aspects stay in their rooms in his mansion, accompanying him when necessary. Sometimes, however, he will call them all together to a large white room in order to have the expertise on every subject to solve more difficult problems.[8]

Stephen uses his abilities to solve cases as a private detective. He calls himself a specialist- one who specializes in many different areas.[9]

Life and Career Prior to the Razon Case

Sometime in his twenties, Stephen met Sandra at Camrid Hotel[10] and she taught him to control his hallucinations, turning them into aspects.[11]

After Sandra left, Stephen took on many cases as a private investigator, including one involving a teleporting cat.[8] The police are often involved,[12] and he is sometimes employed by the government.[Falta cita]

Stephen met with Monica and agreed to take on a case for her tracking a camera that can look into the past.[4] He traveled first to Razon's house,[6] then to Jerusalem. On the way, he created a linguist aspect, Kalyani.[5] There, he was captured by the Abu Sayyaf, who had also captured the camera's creator, along with the camera. He convinced them to free him so he can get a good look at the camera. However, Monica's subsequent escape provoked a shooting match, during which J.C. is able to help Stephen shoot all of their captors. One of the captors didn't quite die and was able to pull the pin on a grenade, which injured Stephen and Monica and rendered the camera unusable and irreparable.[3] Stephen returned to his mansion, with the bulb from the camera, and refused to help Monica further. To help him reverse-engineer the camera, he created an aspect that knows about quantum physics, Arnaud.[13]

Stephen met with an old friend, Yol Chay. Yol asked Stephen to find a dead body and gives him a 10% share in Innovation Information Incorporated, the biotech company owned by Yol, as a consultation fee.[14] Since Stephen was then a stockholder in I3, he felt compelled to help investigate.[15] Stephen first met with the I3 scientist team to learn that Panos, the dead person whose body was missing, had encrypted data written into his body,[16] then he investigated by poking around Panos' desk and office.[17] Yol informed him that he had to leave I3 headquarters, as it would soon be put under quarantine by the feds.[15]

Stephen met with his aspects in the White Room to go over the information he had.[8] He decided the first step was a trip to the coroner's office, but unfortunately, he was tailed on the way there.[18] Suspecting an assassin, Zen Rigby, he confronted the tail, but it turned out to be Dion Maheras, Panos' younger brother. Zen was tailing him as well, just not as obviously.[12] Leaving Dion in the car, Stephen met with the coroner, Liza. She allowed him entry to the morgue and he deduced that a visitor had left tape on the door to obstruct it from locking.[19] He left with a flash drive containing the security tapes. Zen confronted him, demanding to see the drive, assuming it had the key for decrypting the information in Panos' body. Once Stephen alerted the security guard, however, Zen was forced to leave. After realizing he was being tailed by an assassin, Stephen set in to motion a plan that he hoped would save his life.[2] Stephen next went to the Maheras household and spoke to Panos' mother. She refused to give him any information.[20]

After stating that he would break into Exeltec, the company that had hired Zen, he realized that Zen had bugged him during the confrontation outside the morgue. Because of this, he decides against breaking in.[21] He takes Dion to Denny's for a quick break.[22] When they return to the car, Zen is waiting for them. Zen separates him from all his aspects but Audrey and takes him to a cellar, awaiting orders from her superiors at Exeltec.[23] Zen is about to kill Stephen when Wilson buys 60% of Exeltec on his behalf, allowing him to vote himself owner and call Zen off.[24] He returns to Mrs. Maheras' house, where he finds the encryption key behind Panos' portrait and gives Panos' body (which Mrs. Maheras had) to the feds for cryogenic freezing.[25]

During the months following the I3 incident, Stephen stops dating[26] and taking on cases.[27]

At least eighteen months after the I3 incident, Stephen manifested a new aspect, Jenny.[28] Jenny claimed to be a biographer, but Stephen was not sure why she was manifested.[7] Just afterwards, he received a series of texts from Sandra, starting with HELP and including a cipher that points to a drop point at a fairgrounds.[10] After he received these messages, he attempted to meet with all his aspects, only to find Armando had become a nightmare.[29] He continued to the drop point at the fairgrounds and found a phone there, which Sandra called him on.[11] She claimed to have found peace by ridding herself of her aspects, partially confirming a long-running fear of Stephen's aspects that a further meeting with Sandra would lead to Stephen being "cured".[30]

Stephen broke in to Walters and Ostman Detention Enterprises, only to find out he had broke in to a simulation.[31] Kyle, the president of WODE, put him into another simulation, this time of a deserted island. Lua teleported in and helped him break out by making a catamaran, but broke too many rules and had to disappear.[32] He was put into another simulation, this time of a mob raiding a casino, and Ivy, J.C. and Ngozi all die in the crossfire. Breaking more rules, Chin spoke directly into Stephen's mind, telling him how to add the WODE employees to the simulation. Stephen was able to do this because he can see outside of the simulation even while within it. Stephen used J.C.'s gun knowledge (the first time he was able to use an aspect's knowledge after their death) to shoot the mobsters and Kyle using the simulated guns.[33] He then entered Sandra's simulation for one last goodbye. All of his other aspects died, returning back to the shadowy, schizophrenic voices they were twelve years ago. All except Jenny.

Stephen went to Wilson's birthday party.[34] After he excused himself to upstairs, Jenny appeared and told him that she was made from his experience handling aspects, and then she drifts away, leaving her knowledge behind. Stephen sat down to write a book, or perhaps series of books, chronicling recent events. Once he finished, a shadow sounding like Tobias encouraged him to write a sequel telling of future adventures his aspects might have had.[35]