“Better to marry a stone than Silence Montane. A stone showed more affection. ”

Silence Montane or Silence Forescout is a woman who owns a waystop in the Forests of Hell.[1] 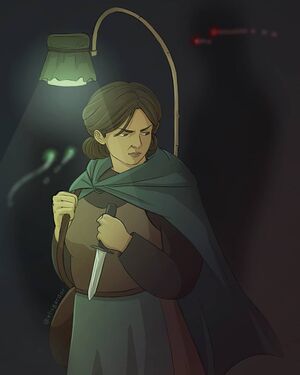 Silence is a stout woman who walks with a noticeable limp.[1] She is also shorter than her daughter, William Ann, much to her joy. When Silence gets very nervous, her fingers start shaking uncontrollably.

Silence commonly wears a scowl, although Daggon believes that it is simply the way that Silence greets people.[1] Daggon and Silence seem to have some sort of connection, as Silence often gives him an extra slice of venison and scowls at him less than she does at others. Silence is a tough woman, who is said to show less affection than a stone.

Silence is an extremely experienced and skilled bounty hunter, aware of ways to circumvent the Simple Rules in killing her targets. She also commonly exploits them, setting traps that light fires to enrage the shades at those whom she would want dead.

Silence Montane runs a waystop which serves as a neutral zone and a safe location to rest in the Forests, as well as place to buy food and drink.

Silence was raised primarily by her grandmother, a tough Forescout woman who was very strict and hard on Silence. Silence was once married, but her husband, William, became a shade, and is rumored to guard the waystop.[1]

Silence keeps a book of wanted posters and bounties, containing images of wanted men and women that she can capture for a bounty of silver, to ward off shades.[2] She notices that a group of men in her waystop are Chesterton Divide and his accomplices, a wanted group of murderers who are worth enough silver to pay for her waystop's supply needs for a year or two.[1] 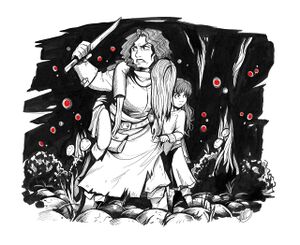 por Shuravf
In the Forests with William Ann

“The one you have to watch for is the White Fox. They say he shook hands with the Evil itself, that he visited the Fallen World and came back with strange powers. He can kindle fire on even the deepest of nights, and no shade will dare come for his soul. Yes, the White Fox. Meanest bastard in these parts for sure. Pray he doesn’t set his eyes on you, friend. If he does, you’re dead. ”

—Daggon on the White Fox[1]

The White Fox is a bounty hunter widely known in the Forests of Hell.[1]

The White Fox has been active for around ten years and has turned in hundreds of bounties to the forts, all without revealing his identity to the general populace by killing everyone to have seen his face.[1] He is not interested in small time bounties, always bringing in more difficult and valuable targets.

Being such a prolific bounty hunter, rumors about the White Fox's exploits have grown up and he is a favorite topic of storytellers.[1] He is rumored to have strange powers, to have visited the Evil, to be able to break the Simple Rules because he does not fear shades. Daggon considers himself an expert on the White Fox and does not believe that he would come to Silence's waystop because it is neutral territory. Daggon tells men stories about the White Fox in exchange for drinks.[1]

The White Fox is rumored to have captured Makepeace Hapshire.[1]

Silence ultimately decides to pin the White Fox identity on Theopolis after his death so that she can claim the bounty for Chesterton Divide and explain Theopolis' death without directing suspicion towards herself.[1]