Para the member of the Reckoners, ver Abigail Casey.

Regalia, also known as Regalia, the Hydromancer, is an Epic that rules over the city of Babylon Restored.[1] Before becoming an Epic, she was known as Abigail Reed.[2]

She is an African-American woman in her seventies. She has white hair and a distinguished, grandmotherly appearance.[3] When David discovers her real body, he finds her appearance to be more of sickly version of her projections.[4]

The "Class B" ability to control massive amounts of water. She used this ability to flood the streets of Manhattan.[5]

The ability to control tendrils of water. She used this ability to attack David, as well as other people. These tendrils cannot feel, requiring light to be effective.[6] 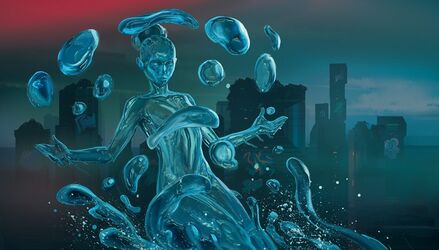 The "Class A" ability to project images of herself anywhere she wishes. She is able to see and interact through these images however she can not be injured through them. Due to this ability her true location is unknown. David assumed that she has a range that limits how far away she can be to create projections and manipulate water, and the Reckoners attempted to use this to their advantage in order to discern her location.[7] However, it was later revealed that this was false as she appeared in the Reckoner's base, well outside her assumed range, when David attempted to contact her.[8]

The ability to both see and hear anything near an open body of water. Supposedly, this body of water needs to be at least two inches deep. Regalia looks into a dish of water, and can see out of any surface of water that touches air.[9] This can be prevented by placing suds of soap on the top of the water.[3] However, she is far from omniscient. She cannot see all bodies of water at once, nor can she scan or randomly find things.[9]

The "Class F" ability to see the future. However, she can rarely interpret what she sees, so this does not elevate her to High Epic status.[7]

Regalia's weakness is being proven wrong.[10] Her weakness is noticeably triggered at least twice. First, when David calls Regalia to the Reckoner base, it takes her a while to appear in water form.[8] This is because she was looking for the Reckoners in the wrong location the whole time. When David summoned her, she realized she was wrong, and thus was unable to use her powers for a short time.[10] Second, when Regalia attempts to make David an Epic, he resists becoming an Epic, upon which Regalia's water form vanishes.[11] Previously, she revealed she was absolutely certain Calamity would be able to make David into an Epic.[8]

Long before the arrival of Calamity she was an attorney, and later a judge. She did not serve very long as she quit to star in her own reality show, Judge Regalia, which aired for six years. She then quit to join the Light of Heaven Television Ministry. She eventually became known as "one of America's most controversial religious figures" because of her divisive preaching.[Falta cita]

Not long after the arrival of Calamity she gained her Epic abilities while on air. After revealing a level of intolerance and brutality not seen before, she lost most of her followers. For reasons unknown she killed her remaining followers then went to New York City where she killed the reigning Epic. She then flooded the streets, renaming the city Babylon Restored.

Plans for a Successor

When the Reckoners discover that Regalia had been sending Epics such as Mitosis and Sourcefield to Newcago to engage with the team, they set their sights on Babilar to take down Abigail.[2] She is served by the High Epics Newton and Obliteration in Babilar. Throughout the book, the Reckoners realize that she has some kind of connection to Prof and a plan involving their leader. Prof informs David Charleston that he had previously been a part of a team of Epics, including Abigail, that attempted to do good.[12] She later reveals that she has a connection with the Epic Calamity and tries to turn David into an Epic, but David rejects the influence of Calamity and seemingly fails to turn into an Epic. Later it is revealed that she planned to corrupt Prof so he could succeed her, as it turns out that Regalia is actually terminally ill with cancer and is treated by a doctor who also takes care of Dawnslight.[4] The Reckoners find her and kill her before she could succumb to her disease. Although dead in the next book, her influence still remains as she is responsible for Prof's corruption and the creation of Epic-based technologies made from Obliteration's DNA.[13]