This article is about the planet. Para the Skyward series novella, ver ReDawn (novella).

“We call ourselves Unity and Independence, but we all enjoy the benefits of both freedom and peace. The real enemies are those who seek to divide ReDawn, who threaten our peace, who put the prosperity of all denizens in jeopardy. ”

ReDawn is the native planet of the UrDail.[2] It is one of the client states (though not a member) of the Superiority, and Alanik's home.[2]

“We've always made the trees of ReDawn our home. ”

ReDawn is a gas giant; it has no surface, save for the metal core at the planet's center.[3] Rather than East and West, directions are given as dawnward and duskward, referencing the sun's rising and setting.[4] It takes approximately one Earth week for ReDawn to complete its planetary day, which the UrDail call a sun cycle and divide into nine sleep cycles.[5][6] Additionally, UrDail use the term season when speaking of age, likely referring to the planetary year. It's unclear how many sun cycles it's comprised of.[1][7]

Most of ReDawn's atmosphere is miasma. The miasma is comprised of primarily of iodine, bromine, acetylene and ammonium hydrosulphide, giving it its distinct red and violet coloring, and making it unbreathable to any living creature.[8][9] The planet also possesses naturally-occurring acclivity stone, large chunks of which float up in the atmosphere. Those floating rocks are overgrown by island trees, city-sized flora that plays host to a variety of plants, mostly vines and bushes. Both the island trees and the smaller plants produce air, creating pockets of livable space within ReDawn's hostile environment.[1][10] This breathable atmosphere has a distinct smell, both floral and acrid.[11]

The island trees grow up to fifty kilometres tall.[10] They have layers of bark, thicker at the base and thinner near the branches, though even far above, the bark can be as much as six feet deep. As it is reasonably easy to carve, the UrDail make their homes in chambers cut into it, and use some branches as farms, producing foodstuffs such as nuts, fruits, spices and juices.[9][6][1][1] Most, if not all of ReDawn's inhabitants live on the island trees, and use atmospheric generators when travelling between them.[12]

ReDawn has no naturally-flying fauna, as none would survive venturing out into the miasma.[12] Nonetheless, UrDail have formed societies on the trees even before the invention of powered flight -- as the islands float in the atmosphere, they occassionally collide with each other, allowing for travel between them.[13]

Additionally, the planet possesses a notable unnatural structure -- Wandering Leaf, a military defense platform leftover from UrDail's alliance with humanity. The platform, automated and fully autonomous, is drifting ever close to the island tree of Hollow, threatening it with its autoturrets.[16] Eventually, however, Detritus humans manage to land on the platform and reactivate its functions, such as teleportation and mind blade cannon, turning it into an asset for ReDawn.[17]

The ancient UrDail spread across the island trees even before the invention of flight, jumping between them whenever the floating islands met.[13] They discovered cytonics at some point in their history, and used them to teleport across the universe, briefly coming into contact with early human cytonics. This sparked a period of cultural exchange, with both species retaining each other's myths and stories even ages later.[9]

UrDail became a spacefaring species some centuries before the Third Human War. During the war, their history of friendship with humanity continued, with two species allied.[18] After humans lost the war and were nearly wiped out, ReDawn government began to call this period of time a human occupation of the planet, possibly to save themselves from a similar fate.[11] Their alliance nonetheless has raised some doubts within the Superiority as to whether the UrDail were fit to join them.[18] The UrDail were permitted to live, however, the decision at least in part motivated by the metal-rich core of the planet making it a valuable asset for Superiority's economy.[6]

While ReDawn traded with Superiority, the planet was not permitted to become a full member of it, owning to their prior closeness with humans.[18] As such, for the next hundred years diplomatic contact was largely limited to negotiating and renegotiating trade agreements on metal exports.[1] The situation began to change when a number of non-Superiority species, including the UrDail, were invited to participate in the nascent Delver defence force.[11]

After Alanik was sent, a planetary balancing occurred, resulting in Unity party gaining the majority in the Council. Unity introduced a number of changes aimed to increase their own political power, including an order to fold the planet's two militaries into one force loyal to the Council -- and, by extention, Unity.[1][15] Unfortunately for Unity and ReDawn at large, in the aftermath of Alanik being replaced with Spensa and her revealing her true identity, the relations between the two countries began to break down as Superiority accused ReDawn of harbouring humans. As a result, Unity scrambled to offer up something to Superiority to forestall their preemptive destruction. Lacking actual humans, they settled on giving up their cytonics, as well as the leader of the anti-Superiority Independence faction, Rinakin.[15]

To enforce their demands, Superiority sent a battleship into the atmosphere to threaten the inhabited island trees. However, Alanik fled the Unity forces to Detritus, where she forged an alliance with local humans. Using taynix, the Defiants managed to defend the remaining Independence military and restore Wandering Leaf's functionality. Using its mindblade cannon, they destroyed the battleship and granted ReDawn much-needed reprive.[17] 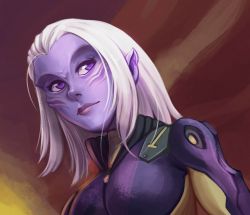 “We don't have to let the Superiority tell us we’re lesser species. ”

ReDawn is the homeworld and seemingly only planet inhabited by the UrDail; as such, its culture is their culture. The UrDail appear mostly humanoid in biology and appearance, albeit with purple skin and white bone ridges under their eyes.[11] They had contact with humanity in the past, even before either species figured out space travel, through cytonics.[9] As a result of their prior encounters with humanity, many UrDail are fluent in English and Mandarin, with at least one of the local languages coming to resemble the former.[18][11] Moreover, there has been some cross-pollination of stories and myths, with several human tales making their way to ReDawn.[9] The UrDail also have their own holy books, the cadamique, though religion does not appear to be a major part of their life.[19]

Unlike modern human cultures, UrDail children are raised primarily by their grandparents, who devote themselves fully to the task while the parents work to provide for the family. As such, many UrDail are encouraged to find a partner, or form a mate-pair, young and produce children at an early age, so that their own parents still have the strength to care for them.[20] How open any given person is about their search for a mate and forming a mate-pair differs, mostly depending on one's tree of origin, with some treating it as a private matter while others are fairly open about it.[9]

ReDawn's primary sporting events are games played using starfighters. The sport involves two teams of fighters, assigned to the planet's two political parties, Unity and Independence, trying to out-maneuver each other to fly through hoops at the opposite ends of the arena. The pilot who tries to make it to the hoop is called the “stringer”. The team members each take turns being the stringer, so that teams don’t just rely on one or two strong players.[1] Harmless laser weapons are used to "tag" players, forcing them out of the game.[10] Independence tends have their strongest players go first, while Unity often saves their best pilots for last.[1]

Though there is no mortal danger save an accident, the stakes are high for the players, as members of the winning team in even the lowest-ranking matches can earn highly desirable postings as both military and civilian ship pilots.[1] Players who hang back from the main fray do not advance from the junior leagues, since individual stats are based off of evasion scores and shooting averages.[21]

Participation in matches is a necessary step to being recruited into either of the planet's air forces, though other factors, such as being a cytonic, allow for skipping it.[1] As such, aggressive behaviour and working alone are both highly encouraged -- a pilot must "prove themselves" by actively participating in the fight.[4][10]

“The core of ReDawn was rich with metals, which was why the Superiority bothered with us to begin with. ”

Mining, conducted by private mining corps, is the largest known industry on ReDawn.[1] Both the planet's core and the island trees are mined, one for metals, the other for wood. Lumber mining operations are conducted by lumberyards in dead island trees, such as Hollow. Mined wood is exported from there -- it's unclear if the timber is exported only locally on ReDawn, or if there are buyers out in the Superiority.[10]

Metal, on the other hand, can only be found in ReDawn's solid core. There, it is present in large abundance and variety, which is why the Superiority became interested in the planet in the first place.[6] Teams in heavy protective gear, including breathing apparatus to deal with the miasma, are sent to the core by the mining corps to exploit it for resources, which are later sold to the Superiority. Maintaining the trade deals on metal appears to be the primary way ReDawn and Superiority interact.[1]

—Slogan of the Unity party[1]

ReDawn is ruled by a single government, the Council of UrDail, comprised of an unspecified number of seats. The Council is a democracy, with members -- known alternately as delegates or representatives -- elected in periodic balancings. There appear to be only two parties vying for Council seats: Unity and Independence. Unity, led by Nanalis, generally pushes the agenda of progress and peace, which according to them will only come through cooperation with Superiority; Independence, led by Rinakin, pushes for freedom of the UrDail and greater separation between ReDawn and Superiority. Colors are used to represent allegiance to one side or another, with yellow meaning Unity and blue -- Independence.[1]

The balance between the two parties extends further to the planet's military. ReDawn has two separate air forces, one commanded by Unity, and the other by Independence. The two armies appear to be completely separate, using different personnel corps and even different military bases.[15] The planet's five living cytonics are divided along those same political lines, with Alanik siding with Independence while Quilan and three others work for Unity.[1] However, while cytonics can work for whichever side they wish, both fighter corps are beholden to the will of the Council at large, regardless of which party holds the majority.[15]

The common UrDail often treat the balancings akin to a political sport, switching sides to support the winner, which often leads to the Council being highly unbalanced between the two parties. While in the past, Independence held vast majority the Council, most recent balancing saw Unity sweep most seats, leaving only a few Independence representatives. Such periodic changes between which side holds majority also mean that ReDawn's foreign policy will change between balancings, with Unity courting Superiority while Independence shuns it.[1]