Raoden is the only son of King Iadon and is the current king of Arelon.[1][2] 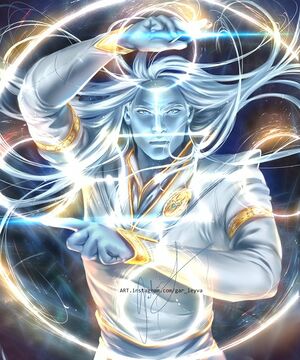 Before the Shaod, Raoden had brown hair, blue eyes, and a handsome face. When the Shaod took him, his hair fell out and his skin became wrinkled and grey with dark splotches, like all other Elantrians.[1] Once Elantris was restored, he gained silver skin and pure white hair.[3]

Raoden has an optimistic attitude and a strong desire to improve the lives of the people around him. He is well-educated and skilled in debate and public speaking. He has a keen ability to determine how any one person can be useful in promoting the benefit of the whole. In Elantris he clearly shows his leadership abilities. He has a skillful hand and is able to proficiently learn and draw Aons. This in turn means that he is quite adept with AonDor.

As an Elantrian Raoden has enhanced speed, strength, insight and extreme regeneration. Not even decapitation would kill him. Raoden shows proficiency in drawing Aons. Both Galladon and Sarene comment on the grace and speed Raoden shows when drawing the symbols in the air.[4] When he connects to the Dor, he shows skills in crafting illusions and combat Aons. Raoden has been mentioned as being "closer to the Dor than others" making his Aons more powerful. While sparring with Sarene under the guise of a noble named Kaloo, he shows that he is close in skill to Sarene and can fend off most of her attacks.[5] He later reveals that he was taught by Eondel[6]. As a prince, Raoden proves himself to be a capable leader by uniting the separate factions of Elantris[7] and restoring the city to its glory.[3] Raoden is Bonded to the Seon Ien. He can use him to communicate with other Seons.

As an Elantrian, Raoden and his Dor related abilities are tied to Elantris. The further Raoden is away from the city the more his power decreases. This goes for both the advantages of his Elantrian body and the effects of his Aons. The decrease is quite drastic; in Elantris, Raoden was able to travel all the way to Teod with a powerful Aon, while in Teod the same Aon only took him about 60 feet. For this reason Raoden would be unable to use AonDor if he ever were to leave Sel. 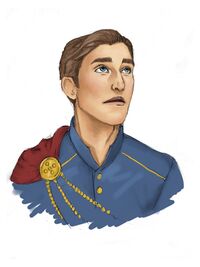 For the majority of his life, Raoden lived in the city of Kae, just outside of Elantris. When he was younger, Raoden suffered from an infection after breaking his leg and was taken to Elantris to receive treatment. There, he witnessed the allure of the AonDor for the first time as a glowing character in the air caused the pain and wound to vanish. He felt a deep gratitude for the Elantarian woman who healed him and became angry when his father railed against the Elantarians on the way home. This led to the first of many arguments between Raoden and Iadon.[8] At some point his mother died.

After the fall of Elantris and Iadon's coronation, Raoden became crown prince of Arelon. He had a rather strict education, being taught a variety of skills that were meant to tailor him into a successful king. However as he got older and more confident he was known to frequently disagree with his father, King Iadon, on a variety of political points. Raoden even obtained fencing lessons from Count Eondel to spite his father.[9] His differing opinions with an almost unanimously disliked king promoted a large following with the young prince.[10] He also had a close friendship with Lukel. Before succumbing to the Shaod, he was engaged to the Teo princess, Sarene.[11] 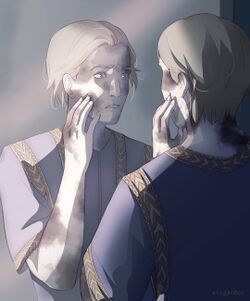 por Elisgardor
Seeing himself in the mirror the morning the Shaod struck him.

Ten years after the Reod, Raoden underwent the Shaod transformation into an Elantrian, a transformation that was, at the time, incomplete.[1] He was immediately cast into the rotting city of Elantris, as was tradition. When he was thrown into the city, he took the first step to the right and thus became the prey of Shaor's gang. Raoden was soon attacked by Shaor's men and attempted to run away. Raoden escaped from his pursuers by throwing them his basket with offerings. The mad Elantarians pounced on the basket and fought over it, paying no further attention to Raoden. Afterward he was approached by a Dula named Galladon and learned that he had become like a corpse, with no heartbeat and an inability to heal his own wounds.[1] Raoden hired Galladon as a guide for the next thirty days with the last of his offerings. Galladon told him of Elantris and the fate that awaited modern Elantrians. He eventually showed Raoden that Elantrians retained the ability to draw Aons,[12] but that they were unable to access the Dor, making the glowing lines useless to the Elantrians. This led to Raoden's investigation of the connection between the failure of AonDor and the Reod.[13]

Restoring Elantris to its Glory

As an Elantrian, Raoden worked to bring peace and civilization to the people living in Elantris, who had devolved into a primitive, bestial society.[14][15] First, he adopted the identity Spirit and rounded up new arrivals and convinced them to join him in rebuilding the city. After rumors spread that those surrounding Raoden no longer felt pain or hunger, many were drawn to the Elantrian. He later brought some semblance of order to the city by bringing together the two opposing factions led by Karata[16] and Aanden[14], and providing resources to the Elantrians. Despite his own suffering, Raoden managed to restore a sense of purpose and hope to the Elantrians by assigning them individual jobs and assignments so they could better their once-glorious city. 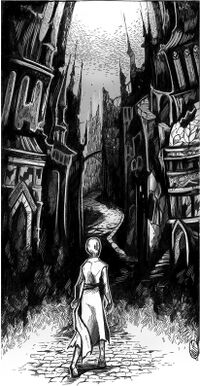 In an attempt to better the lives of the Elantrians, Sarene brought food to Elantris.[17] There Raoden met Sarene under the guise of Spirit but only he recognized the Teo princess while she believed him to be just a common Elantrian. Karata and Mareshe, posing as the head Elantrians, agreed to allow Sarene and the other nobles to distribute food to the people if they also provided various goods, which the Elantrians would later use to make clothing and some repairs to the city. Sarene suspected that Raoden as Spirit was the ruler of the Elantris and eventually started to trust him.[17]

Connecting to the Dor

As Raoden and Galladon discussed AonDor, Galladon suggested that the land had changed, causing Raoden to realize that the chasm near Elantris had caused the Reod, rather than the other way around as most people believed. Raoden drew a modified Aon Ehe that included a line for the chasm, and a massive stream of fire that exploded from the Aon incinerated part of the library. With further experimentation, Galladon and Raoden determined that the AonDor was still inhibited and the strong burst of power was the result of a large reserve of energy being released at once. Further Aons didn't produce effects as powerful as the books described, any Aons that targeted each other didn't work at all, and they still had not become like the pre-Reod Elantrians. However, they were able to use the AonDor to some degree. For instance, Raoden crafted a handy Aon, based on Shao, that allowed him to create an illusion around him of a healthy human, making it possible to leave Elantris.[18]

Under the guise of exiled Dulas, Raoden and Galladon entered Arelon and met with Sarene and her allies. Suspecting the newcomer to be a spy, Sarene sparred with Raoden and accidentally wounded him, adding to the many pains he already suffered.[5] He eventually revealed his identity as Spirit to Sarene and shared his reconnection to the Dor. During a meeting at Kiin's house, Count Ahan betrayed them to King Telrii, who had Duke Roial killed and ordered the execution of the others. 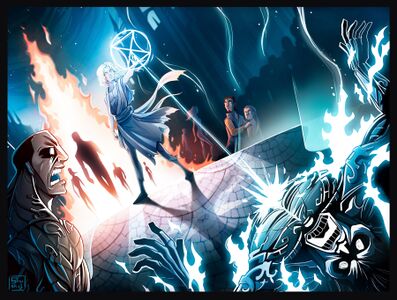 por Shuravf
Fighting to save Elantris

On the spur of the moment, Raoden dropped one illusion to reveal another, one of his appearance before being taken by the Shaod. Telrii fled and Sarene and the others are shocked by the revelation. Raoden attempted to heal Roial but failed due to his lack of knowledge of the healing Aons and the blockage of the Dor.[19] With news of his return, Raoden's coronation was scheduled, but while speaking his illusion dropped and his status as an Elantrian was revealed to the citizens. Sarene managed to calm the crowd and they accepted Raoden as king despite his appearance.[2]

Healing the Elantrians and Fixing AonDor

While Elantris was under attack by Wyrn's army, Raoden discovered the key to restoring Elantris after realizing that Elantris and its surrounding cities formed one massive Aon. He drew a line to represent the chasm that caused the Reod, fixing the Dor and completing the Shaod in all living Elantrians. The healed Elantrians repelled the attacks from Fjorden in both Arelon and Teod.[3][20] Raoden restored Elantris and from it rules both the city and Arelon.

Raoden first is engaged to Sarene for political reasons, but he believes he knows her and loves her because of her letters and the talks they had through Seon. Raoden is thrown into Elantris just before Sarene arrives in Arelon. He first meets her when she performs her widow’s trial in Elantris, and although he believes she is trying to help those there, he believes she is doing the worst thing possible for them. He later revises his opinion after she finishes her trial and his band’s numbers increase significantly. Raoden later meets Sarene when she is poisoned by Hrathen and thrown into Elantris. He spends almost all of his time with her while she is there, but when the poison’s effects stop, he tells her to leave Elantris and help Kae, even though he desperately wants more time with her. Although he knows her for only a short time, his love for her is so great that he is willing to risk his life and try to rescue her from Dilaf. After he travels to Teod via Aon Tia, he flights to rescue her, and with the help of the other Elantrians and Hrathen, he is successful. Eventually, Sarene becomes pregnant with his child.

Iadon is Raoden’s father. Before the Shaod took him, Raoden often opposes his father in public, and is responsible for leading the group of nobles that are attempting to change Arelon’s government. When Raoden led them, this group was composed of around half the nobles in Iadon’s court, however this shrinks to just five nobles when Sarene begins to take control. After being taken by the Shaod, when Sarene informs him about his father’s suicide, although he had wished for his father’s demise before, he is still pained by his death.[22]

Originally from Duladel, Galladon is Raoden’s friend. They meet first in Elantris, after Raoden escapes from Shaor’s men. Although Raoden first buys Galladon’s loyalty with a piece of dried meat, they quickly become good friends. Galladon, although often pessimistic, is often supportive of Raoden’s plans, even if he must sometimes be the voice of reason. Galladon is the one who rallies the Elantrians to save Raoden from Dilaf and the other Dakhor monks in Teod, proving the extent of their friendship.