“I'm not sure I'd wish this command on [the pilots I used to fly with]. Not even the ones I hated. ”

Judy Ivans (Callsign: Ironsides) is the Admiral of the Fleet of the Defiant Defense Force until after the Battle of Alta Second.[3][1] Over time, the number of acclivity rings and pilots available to the DDF has dwindled, leaving her increasingly desperate to fend off the KRELL. As a result, she approves a desperate mission to retrieve half of a C-137-KJM orbital shipyard with hundreds of acclivity rings.[4] That plan nearly resulted in the KRELL destroying Alta Base and Igneous Cavern;[5] that near-defeat may have been a factor in her "reluctant" retirement.[1] Prior to becoming an admiral, she fought in the Battle of Alta, making her a First Citizen; Chaser's actions during the battle leave her terrified of another person with the "defect" (the brain condition that grants access to cytonic abilities) becoming a pilot and she does everything in her power to prevent that from happening.[6] 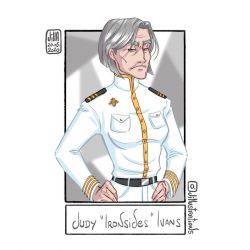 “[Until] the very last Defiant heaves their very last breath, we hold this base. ”

Admiral Ivans is "a tall older woman" with silver hair that comes down about to her chin. As commander of the DDF, she wears a white admiral's uniform.[3]

Once it becomes necessary, Ivans isn't one to back down from a fight,[7] but she is often cautious about committing her pilots to battle for fear of sending them into a trap.[6] She is self-aware and able to recognize her own shortcomings, such as her trouble committing to an engagement and decreased reaction time.[6] According to Cobb, she is surprised whenever someone defies her,[8] though she says most of the people who once did are now dead and is actually pleased that Cobb is still around to defy her.[2] She regrets all of the pilots who have been killed while following her battle orders, but knows that there is only so much she can do and that letting her guilt weigh her down is not productive. Nevertheless, she makes sure to read the casualty reports from, and watch the holos of, every battle, listen to any audio from a pilot's last moments, and hand-write a letter to the family of any pilots who were killed.[2][6] She is known for being "stern, but fair."[3]

Ivans was a skilled pilot, who was capable of tailing a pilot as skilled as Chaser, and flightleader of Hope Flight.[9] At some point after the Battle of Alta, however, she realized she was getting too old to fly in battle and entered the DDF's admiralty.[6]

Knowledge of the Defect

Many of the most important families on Detritus trace their lineage back to those who mutinied on the Defiant, and so do everything they can to keep knowledge of the mutiny and defect contained.[6][10] Ivans, however, is at least aware of the mutiny and believes it was caused by the defect, though she herself admits that the whole story isn't "clear" to her.[6] Initially, she believed that the defect should not keep people from becoming pilots and "stuck her neck out" by arguing that Chaser should be allowed in the DDF.[11] Ever since he attacked her flight in the Battle of Alta, however, she has been absolutely terrified of another pilot with the defect joining the DDF. This often puts her in conflict with many prominent National Assembly Leaders and the head of Alta Base's medical staff, Dr. Thior, all of whom deny the existence of the defect.[6] In order to protect the DDF, she does everything she can to make life so miserable for Spensa that she drops out[12] and has her medical staff set up sensors in Spensa's helmet to record brain activity and watch for signs of the defect.[6] After she discharges Spensa from the DDF for ejecting during a battle, Ivans feels that Spensa's tenure in the DDF has worked out in the best way possible, as Ivans has succeeded at keeping her from flying and now has data to monitor all new cadets for signs of the defect.[4]

Early Days of the DDF and the Battle of Alta

Prior to the Battle of Alta, Ivans was the flightleader of Hope Flight, which included Cobb and Chaser,[9][13] and argued that Chaser should be allowed in the DDF despite having the defect.[11] As the KRELL descended prior to the Battle of Alta, she was outspoken in urging the DDF to fight, despite the high number of incoming KRELL.[7] In the battle, she gave Chaser permission to fly up to space after he promised that he could control the defect. When he returned and began attacking DDF pilots, she gave the order to shoot him down and tailed him with Cobb,[9] though her name was redacted in the official report.[14] After the battle, to protect his family, she ensured that the official report said Chaser turned coward and tried to fly away rather than that he was a traitor.[15]

Command of the DDF

“She saw, in [the pilots'] deaths, her own faults. She hadn't been willing to truly commit. ”

—Ivans' reflections on why she is losing the war[6]

Some time after the Battle of Alta, she realized that she was getting too old to fly and became Admiral of the DDF,[6] though she seems to believe she only has her command because anyone else who could have taken it is now dead.[2] As a result of her dual status as both a First Citizen and commander of the DDF, there are "hundreds of paintings and statues" of her and Spensa considers her "basically the most important person in the world."[3]

As a military commander, Ivans is cautious and reluctant to commit the entirety of her forces, especially as the number of pilots and acclivity rings the DDF has is steadily diminishing.[6] In order to have enough pilots to fend off the KRELL incursions, she has lowered the age of testing to become a cadet and begun to send up less experienced cadets.[2]

After seeing Chaser turn on her flight members, she is terrified of someone else with the defect joining the DDF and, as a result, does everything in her power to prevent Spensa from becoming a pilot.[6] When Spensa attempts to take the pilot's test, Ivans specifically orders that she is not to be admitted,[16] personally supervises the administration of the test, and gives Spensa a test to be a sanitation worker, not a pilot.[3] Later, Cobb forces her to allow Spensa to be enrolled in his class, but she forbids Spensa from using any of the Flight School facilities in an effort to make Spensa's life so difficult that she drops out.[17][12]

As her number of pilots and acclivity rings dwindles, she eventually decides to make a bold strike for a shipyard in a decaying orbit.[4] When a lifeburster enters the battle, she orders her pilots to keep it away from the shipyard, even if that sends it towards Alta Base. When it does, in fact, make for Alta, she decides to order a flight of just scouts, including Cloak and FM, to engage it. The scouts successfully shoot it down, but, when the bomb lands, it takes out some of the DDF's AA guns.[11] At that juncture, a second KRELL fleet, with another lifeburster, enters and slips through the hole in the defenses, leading her to realize that she has been outmaneuvered and possibly "doomed all of humankind."[5] As the lifeburster nears the "death zone," past which its detonation will take out Alta Base, she accepts her death and, hoping to save Igneous, authorizes Spensa and the other pilots to shoot it down regardless.[18][19]

After the KRELL are defeated and Spensa manages to save Alta, she decides to pardon Chaser and tries to convince Spensa not fly to space, but to no avail.[15] When Spensa returns, she sees little value in the information that M-Bot hacked from the KRELL, as it does not change the fact the DDF is still facing down a superior force.[20] Sometime after the battle, she reluctantly retires as Admiral of the Fleet of the DDF and Cobb, equally as reluctant, steps up to fill the position.[1]

Ivans is impressed with Spensa's dedication and ability as a pilot, but is too scared of the defect to want her in the DDF.[4] Spensa, in turn, is initially angry with Ivans for trying to keep her out of the DDF, but, after finding out the truth of the Battle of Alta, realizes how much Ivans has done for her[21] and comes to respect Ivans as a "warrior”.[22]

Ivans was a fierce defender of Chaser and always argued that he should be allowed to fly, despite the defect.[11] Even after the Battle of Alta, she ensured that official records of the battle said that he turned coward and tried to flee, rather than that he started attacking his flightmates.[21] Prior to the Battle of Alta, as his flightleader, Ivans sometimes had to remind him to stick to his wingmate rather than break off to engage the KRELL; their relationship reminds Spensa of that between herself and Jorgen.[13][10]

“It was good she still had someone to defy her. Most everyone else who had done that was dead now. ”

—Ivans' reflections on her relationship with Cobb[2]

Prior to the Battle of Alta, Ivans was Cobb's flightleader, and the banter between the two of them reminded Spensa of her own relationship with Jorgen.[13] The two worked together to bring down Chaser after he started attacking their flight and are likely the only two who know the truth of what he did in the Battle of Alta.[9] Cobb is the only surviving pilot from Ivans' own time as a pilot, and they remain respectful towards each other, as evidenced by Cobb waiting for her to finish a letter to the family of a dead pilot before starting an argument with her.[2] However, they also disagree sharply about Ivans' policies for the DDF, which she believes are necessary to defend Alta Base and Igneous, but he feels get pilots and cadets killed needlessly and likens to "firing on full auto while simultaneously stealing ammunition from the stores." She is also shocked that he is willing to let Spensa fly after seeing what the defect did to Chaser.[2] After Cobb takes over as Admiral of the Fleet, he begins to better understand her complaints about being in charge and how those in command rarely understand what is truly going on.[23]

Rikolfr is Ivans' aide-de-camp. He keeps track of everything she needs to do; brings reports to, and reviews their content with, her; helps her prepare to deal with various situations, such as a meeting with National Assembly Leaders; and carries orders from her to other DDF staff.[6][4] Considering her messy office,[2] Rikolfr's organizational skills are likely a great asset to Ivans, and she trusts him enough to include him in meetings with National Assembly Leaders.[4] After Ivans' retirement, Rikolfr remains on the DDF's staff, now serving Cobb, the new Admiral of the Fleet.[24]

Ivans seems to interact with the rest of the DDF's staff mostly through Rikolfr, so her relationship to the rest of the staff is somewhat unclear. Notably, however, she disagrees sharply with the head of Alta Base's medical division, Dr. Thior, as the doctor is adamant that the defect does not exist.[6]

Ivans is continually frustrated by the National Assembly Leaders denial of the existence of the defect,[6] removal of their children—some of the top pilots—from the DDF,[4] and refusal to send up their private ships to aid the DDF during KRELL attacks.[5] The National Assembly, in turn, is frustrated by the falling number of available ships and high pilot casualty rates during her tenure as Admiral of the Fleet,[4] though they are also afraid to take power from her and make decisions themselves, as they prefer to be able to blame her for anything that goes wrong rather than risk that blame falling on themselves.[25]