“The next ship in line was a long, stately vessel made of white wood with golden trim. Its entire presentation seemed to say, Good luck affording me. ”

—Shallan's observations of Honor's Path at the Celebrant docks[1]

Honor's Path is a honorspren ship in Shadesmar, previously captained by Notum[2] and crewed by mistspren and honorspren.[1][3] The vessel may have been built before the fall of the Radiants.[3]

Honor's Path is an ostentatious, long stately vessel made of white wood.[1] The ship has a golden trim,[3] which matches the harnesses of its mandras,[1] and winglike rails that protrude from the sides of the vessel.[3] The ship uses more mandras than a regular merchant vessel, with rigging available on the front and side rails, which allows Honor's Path to move at a greater speed than a regular cargo ship.[3] It is built like a military ship, intended to carry troops, however, it is not always used in this manner.[3]

It has five decks, three within the hull, and two open to the air. The levels below the main deck are used as living quarters for the crew and passengers, as well as storage.[3] A high deck runs the length of the ship above the hull, supported by broad white pillars. It is narrower in size than the main deck and offers a clear view of the ship's surroundings. At the very front of the high deck there is a flagpole. The main deck is similar to vessels from the Physical Realm.[1][3] Somewhere in the ship's hold, is a cargo door, which is big enough to allow multiple people to move through it at once.[4]

The ship is well equipped to accommodate human passengers. The vessel likely has the standard rations and hydrators needed for humans, but also contains a washing machine.[3] 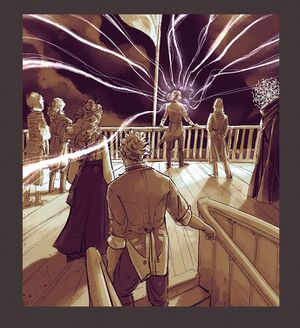 “You’d better catch me before I scamper away! Wow! I’m feeling capricious today. I might just vanish again, off to where nobody can find me! ”

—Syl revealing herself in Celebrant to gain her and her friends passage.[1]

Honor's Path docked in Celebrant in 1173, on its way to Lasting Integrity. To escape the Fused, Syl revealed herself to the honorspren on the ship to gain passage for herself and her friends. Once aboard, the crew took their new passengers captive, though initially only Syl was physically restrained.[1]

After a week of captivity, the honorspren released their human prisoners, as well as Pattern, and allowed them to move freely about the ship, with the exception of the high deck. Syl, however, remained imprisoned. After being released, Kaladin argued with the honorspren about his spren's continued imprisonment, leading to him being locked up again for two more days.[3]

During the journey, Azure came to an agreement with the honorspren, agreeing to trade knowledge about her blade in exchange for free passage and information on Nightblood once the ship docks at Lasting Integrity. The others instead wished to escape, with Kaladin planning on trying to get the group to Thaylenah as the ship passed the Longbrow's Straits.[3]

After several days of sailing, the Fused caught up to the vessel.[3] Despite their attempts, the ship was not able to outrun their pursuers, and eventually deviated its path to draw closer to the Longbrow's Straits, to allow their passengers the means to escape. Azure remained with the ship and was presumably captured along with the Honor's Path's crew once it was caught by the Fused.[4]

The ship eventually arrived at Lasting Integrity, just before the fortress closed its gates to outsiders.[5] Notum was stripped of his title of captain and demoted due to his decision to let Syl and the others escape.[2]